SK Telecom T1 is without a doubt one of the top Korean Esports organizations to date. In this article, we will be giving you some of the best T1 betting tips, go over some of our go-to websites you can use to bet reliably on your favourite teams, and discuss some of the main teams in the T1 roster.

T1 is a Korean professional Esports organization founded in 2012. With their League of Legends team winning the world championship in 2013, 2015 and 2016, they are a notorious team that has created a giant uprising in the esports community after having a flawless season in 2013-2014. Aside from their well-known LoL team, they have active teams in other gaming disciplines including Fortnite, Dota2, Super Smash Bros., Hearthstone and Apex legends.

SK telecom’s teams have earned over $10,000,000 in prize money over the years, making them one of the most profitable esports organizations out there. In October 2019, there was a merger between SK Telecom and Comcast spectator, changing the name from SKT T1 to just T1 where they put Joe Marsh at the head of the company as CEO. Second in command is the legendary LoL Player Faker himself as a co-owner of the enterprise. Some of the sponsors are huge names like Nike, BMW and Red Bull.

Although the focus of T1 is on the League of Legends team, you will find high ranked T1 contenders in all of the main Esports categories, which we will discuss below. Recently they have even started a PUBG team seeing as it has become a widely popular game.

All of T1’s top achievements have been in LoL, where their status is legendary.

To play a flawless season in League of Legends is a near unachievable feat the SK telecom team has shocked the world with. Their Mid-laner Faker is widely considered the best LoL player in the world. Not only did they play a lossless season, they went on to win three World Championships and a dozens of other tournaments that we have not mentioned.

T1 currently consists of a 10-man Roster with some faces that have been there since the beginning of T1 but also players that have “graduated” from the T1’s own Challenger roster.

One might say his name will echo into eternity with the kinds of wild plays and turnarounds he has made. You might find some footage of these replays as well as flabbergasted people who have a hard time believing the technical skills of Faker. Faker first joined the team in 2013 and is still on the roster to date known as the best mid laner the world has ever seen. His last big win was in 2019 at LCK Spring 2019, which was good for $87,000. Faker is, saving his teammate Bengi, the only person ever to win three world championships.

Canna is one of the most talented LoL player in the T1 roster. Khan is his role model. Due to its high number of solo kills, the English viewers named him “Solo Kill King,” while the Korean viewer gave him the name, “Solo Killing Machine.” In summer 2020, Canna almost surpassed the MaRin’s record.

Cuzz is a top-rated T1 Player that goes by the name Moon Woo-Chan. He was ranked number one in Korean Solo queue after the completion of season 6 and 9. He is well-known for his exceptional playing skills. Cuzz was among the small group of who won the first split they took part in; he won the Longzhu gaming and LCK/2017 Season (Summer).

Teddy is a professional League of Legend player at T1 esports team. He is recognized for highest CS rating in LoL history. He broke the record of Bang and Zven with its 1456 creep kills. In LCK, Teddy is the tenth player to reach the 1000th kills.

Gumayusi is the younger brother of Innovation, a professional StarCraft II player. He made his official debut for the team in 2020 Regional Finals after being a trainee and substitute on T1 esports team for most of 2019 and the following year. The team beat Afreeca Freecs to reach the second round, but they lost Gen. G in the final round.

Clozer is an exceptional LoL player with great skills; he was promoted to the main LoL roster in July 2020. He helped the team to achieve a 2-0 win against KT Rolster. Irelia and Are Akali are his favourite champions.

Before joining T1 team, Keria played as the starting support for DRX. He is an award-winning player; he won the PC rookie of the year at the age of 18. Pyke is his favourite champion.

Currently, Zeus is a substitute top laner for T1 LoL team. He is a talented player who have the full support of his mother. Due to the similarity to his name, his mother recommended the nickname, “Zeus.” Nuguri is his role model.

Oner is a Korean esports player that goes by the name Moon Hyeon-joon. Before joining the main roster, Oner was in the T1 Academy.

Moment is an experienced coach with enviable records. Before becoming a coach at T1 LoL team, he had coached a few teams, including Jin Air Green Wings and Reverse Gaming.

Hosung Ryn, also known as Hoit, is currently a substitute support for T1 LoL team. He is a professional League of Legend Player who represented his country, South Korea, at the eight IeSF Esports World Competition.

The current roster of T2 Dota comprises Whitemon, Kuku, Xepher, Karl, and 23savage. The team is scheduled to play against Team Spirit on 6th September, as well as other top upcoming tournaments, including The International 10 and OGA Dota PIT Invitational 2021.

T1 Valorant is a vibrant team that feature top-rated players, including Skadoodle, Autimatic, Spyder, Curry, and Brax. Recently, they have also promoted DAWN from their academy. In some of their recent matches, the team defeated Version1, Cloud9 Blue, and Immortals. However, they lost to Team SoloMid, Sentinels, FaZe, 100 Thieves, among others. 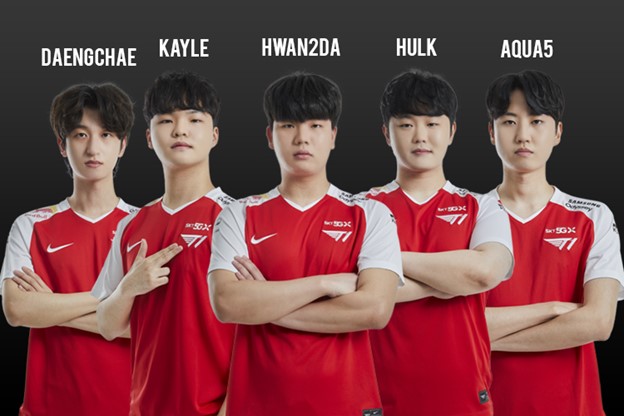 T1’s Most impactful signings to date

Where to find the best T1 betting odds

Pinnacle is a top-rated esports betting site that features T1 matches. Hence, it is an ideal website for T1 betting. This esports betting site was established in 1998 with its headquarters located in Curacao. Apart from esports, the platform features casino, sportsbook, and live betting. The website is easy to navigate, and it is compatible with both desktop and mobile devices.

GG.bet offers an exciting and rewarding gambling experience to all categories of bettors, whether you are newbie or an experienced bettor. The betting site was founded in 2016, and it has continued to attract the attention of esports bettors worldwide. The sportsbook feature entertaining esports games like Counter Strike Global Offensive, League of Legend, Dota 2, etc.

Betway is a well-known sportsbook that features T1 esports matches. Apart from that, it supports a handful of convenient and safe payment options for smooth transactions. The website offers generous bonuses and high-quality support services. The site also offers helpful stats and information that will help bettors make the right decisions.

1xbet is an exceptional esports betting site established in 2007. The website is a great choice for esports enthusiasts from around the world, as it features top esports games like Starcraft, King of Glory, Rocket League, among others. The website features many bet types, including accumulators, singles, chain bets, and live bets, among others. It comes with one of the best user interface, and it supports up to 60 languages.

Bet365 supports safe and fast banking methods for bettors’ convenience. Launched about two decades ago, the platform has managed to win over the heart of many bettors worldwide. With its competitive odds and attractive rewards, it offers a rewarding gambling experience. In short, bet365 is an ideal choice for T1 esports betting.

In esports betting, it is advisable to make an informed decision rather than depending solely on your instinct. Most betting sites offer information that will enable you to make a wise betting decision. Apart from that, you should endeavour to visit Gol.gg and HLTV for useful stats on T1 betting. Furthermore, you can also get useful data at T1 official website.

3. Keep a bankroll and manage it well!

With the details provided in this article, we hope you have what it takes to enhance your success chances whenever you decide to go for T1 betting. In addition, you have acquainted yourself with the current roster T1 lol players as well as other top T1 esports players. We hope the tips provided above will enable you take informed T1 betting decisions and boost your returns on your T1 esports betting. Make sure to choose top-quality betting sites with competitive odds and a vast range of betting options.

There are several betting sites featuring T1 esports betting; notable among these websites are 1xbet, Pinnacle, Betway, GG.bet, among others. You will be able to bet on T1 matches once you register and deposit on any of these platforms.

T1 features several esports team with talented players; some of these teams include T1 LoL, T1 Valorant, T1 Dota2, T1 PUBG, among others.

Yes, it is legal to bet on T1 matches. However, you must ensure that you register at a valid betting site and must be operating legally in your jurisdiction. You should consider our recommended websites for T1 betting.

The profitability of T1 betting depends on several factors: first, your chosen betting sites, next, the ability to follow useful T1 betting tips, including proper bankroll management, use of data and stats, among others.

Yes, you can place live bets on T1 League of Legend Matches, provided you sign up at betting sites that offer this betting option; some of the top live betting providers include Betway, and GG.bet.