Little did Valve know that their highly-competitive endeavor would still stand strong ten years after its initial release and continue packing a punch in the department of first-person shooter (FPS) games. But how many ranks in CS:GO are there? What does your rank tell about your skills and performances? How do you climb up the ranks? Should you even care about them? All that and more awaits in our comprehensive CS:GO ranks guide!

What Are CS:GO Ranks?

To better understand the complexity behind all CS:GO ranks, it’s important to first understand what they are. In short, CS:GO ranks are visual representations of players’ ELO. It’s a similar concept we’ve seen with other competitive games like League of Legends.

Once you start playing the games’ competitive game mode, after a couple of matches you will earn yourself a rank. Typically, you’ll get anywhere from Silver II to Gold Nova II, depending on how well you’ve played in your placement matches.

Getting your first rank in CS:GO is only the start of your journey. Consecutive losses will fling you down a rank; consecutive wins will help you rank up.

CS:GO’s competitiveness is not just helping the game’s popularity but keeping the CS:GO betting scene afloat too, as it creates a sense of achievement with every win and rank up. More on how the CS:GO ranking system works below.

Here’s a list of all CS:GO ranks in order from lowest to highest:

How Does the CS:GO Ranking System Work?

Although the game has attracted millions of fans across the globe, the CS:GO ranking system still has inherent flaws. For starters, there are no clear indications as to when you’re going to rank up. The same goes for ranking down. Neither are there indicators of what goes into the calculations, which can be frustrating to new players until they get used to it.

CS players might disagree here, but coming from outside CS, I'm not sure what it means to be Nova-Legendary-Master-Eagle-First-Class. pic.twitter.com/yQQP52YtXV

In other games, this is executed much better. Take VALORANT as the perfect example – you have a similar ranking system, but with clear 0-100 bar that has to be filled with wins (or great individual performances) in order to rank up.

Another thing worth mentioning about ranks in CS:GO is their regional nature. The distribution of CS:GO ranks in North America and Europe is not identical. There are certain differences that we’ll be going through in this section.

There are many similarities too. For instance, in both regions, the majority of players are ranked between Gold Nova 1 and Master Guardian Elite. Almost 60% of players are found within these seven ranks, which goes to show you the Gaussian distribution curve is everywhere around us. 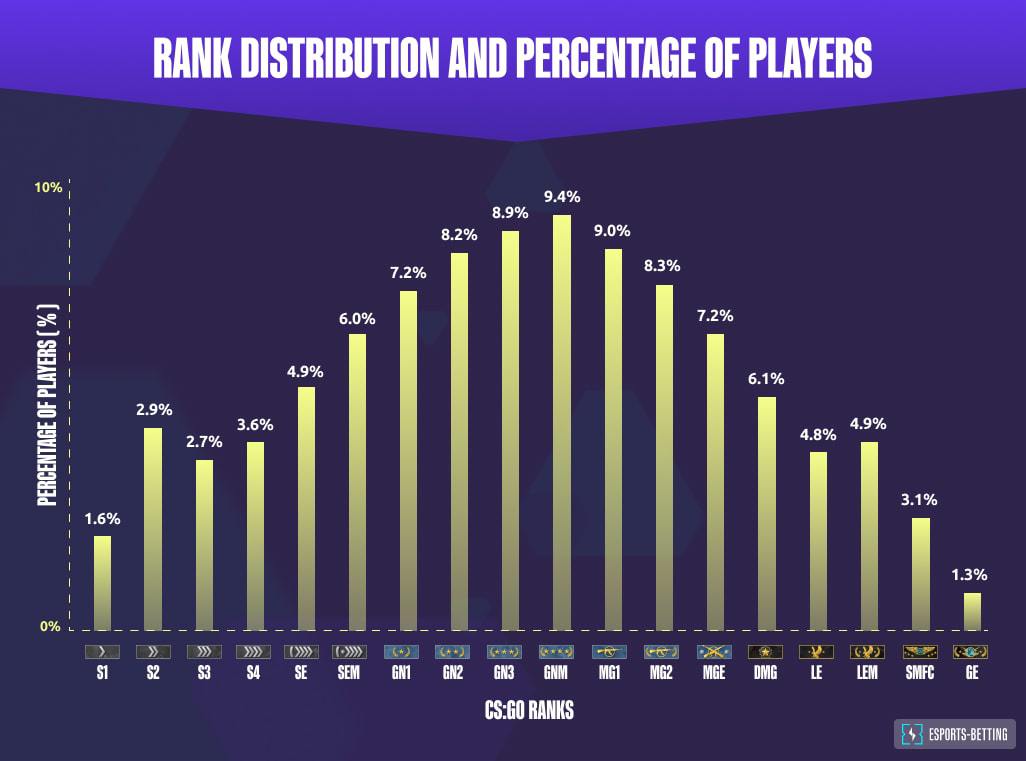 When comparing NA to EU, CS:GO ranks distribution, we’ll notice that European players have slightly higher ranks than their NA counterparts. But that doesn’t necessarily mean the EU scene is stronger, though the results of CS:GO tournaments in recent years suggest the same as well.

The history of CS:GO ranks is pretty straightforward. Ever since the CS:GO release date and the beginning of ranked play back in late 2012, there have been no visible changes to the game’s ranking system.

In other words, the 18 ranks we got at the release date are still the same 18 ranks we have to this day. But there must be some behind-the-scenes alterations to the ranking system that we don’t know much about. Unfortunately, we can only speculate about these sorts of things.

Should You Care About Your CS:GO Rank?

Sure, winning matches and ranking up does give a fantastic sense of achievement; it raises your dopamine levels and makes you happy… at least for a while. But, should you really care about your CS:GO rank?

Well, there’s no one-answer-fits-all here. There are several reasons why one might care about their CS:GO rank. The most important one is competitiveness; if you have friends who are also playing the game competitively, you’ll probably want to be better or be at the same level as them.

Furthermore, one might think that the higher their CS:GO rank is, the better their skill is, but that’s just a myth. Sure, there’s a big skill gap between MGE and LEM, but it’s much less noticeable within the first ten ranks.

Why is that so? Well, let’s take a look at the truth about skill-based matchmaking in online games.

The Truth Behind Skill-Based Matchmaking

According to the Washington Post; “Skill-based matchmaking is a system multiplayer games typically use to place players of similar skill levels in matches against each other to fairly balance teams and maximize the enjoyment players get from the game.”

In theory, skill-based matchmaking is there to ensure everyone has a competitive match on their hands. However, in practice, things work much differently.

Competitive games like CS:GO, Dota 2, and League of Legends possess tons of smurfs (esports term for highly-skilled players playing on a secondary account with low ranking) who want one thing and one thing only – to dominate the opposition that is far below the rank of their main account.

Not everyone wants to play a competitive match – some just want to dominate. This goes for streamers too – they want to completely obliterate their opposition and create fun content for their viewers… and let’s face it, not all of them can do so at the rank of their primary account.

What’s the solution? Simple – create a brand-new account to be placed in matches with much weaker opponents. How to combat this? Well, the only real way to do so is to ban newly-created accounts that obliterate the opposition match in and match out.

The problem lies in the fact that it’s difficult to create a system that wouldn’t end up banning a small portion of legit players too, which would cause more harm than good to the game’s ecosystem in the long run.

How To Rank Up in CS:GO

So, what’s the best way of ranking up in CS:GO? While there are lots of theories out there that claim different factors play different roles in how many wins you’ll need to rank up, we won’t get into the technicalities, as there isn’t enough relevant information provided by Valve.

What we will do is give you three straightforward tips that will undoubtedly increase your chance of winning matches and improving your CS:GO rank.

Yep, this is one of the easiest ways to improve your skill and climb up all CS:GO ranks out there. By watching the pros do what they do best, you will get a better sense of what to do and what not to do in a game.

Additionally, listening to the commentaries will provide plenty of useful insight too. There are lots of CS:GO tournaments you can choose from, the biggest of which are CS:GO Majors, BLAST Premier, and Intel Extreme Masters.

Communicate With Your Team

We can’t even begin to explain just how important teamwork and communication is – it’s the basis of all team-based competitive games. No matter if you’re playing CS:GO, VALORANT, League of Legends or Rainbow Six – communicating with your teammates is key to climbing up the competitive leaderboards.

We’re talking about productive communication that helps you and your team combat the opposition more efficiently. Pre-round strategy discussions, providing vision and info – both are equally important and will give you the upper hand.

Last but not least – if you want to go beyond Gold Nova ranks, you’ll need to learn how the game’s economy works. You can’t go buying Galils or Sub-Machine guns after losing rounds and expecting to turn things around. Sure, it might happen every once in a while, but for the sake of consistency, learning the basics of CS:GO economy and when to go eco is a must!

Are CS:GO Ranks the Same as Levels?

Nope, they are two totally different things. CS:GO ranks are (at least in theory) indicators of your skill, while CS:GO levels are indicators of how long you’ve been playing the game.

At the moment, Counter-Strike: Global Offensive has 40 levels. If you climb through all of them, you can redeem the CS:GO Service Medal. If you do so, you will be returned all the way back to level one and can begin the grind yet again… this time for an upgraded CS:GO Service Medal.

Now that we’ve gone through all the ranks in CS:GO, explained their importance and the reasoning behind why some players care about them, it’s time to wrap it all up! Regardless of your opinion on them, ranks in CS:GO do have a meaning: the higher your rank, the more quality opposition you’ll have to face.

It’s true – you’ll be finding lots of talented players along the way, but beyond the lower ranks, you’ll be facing rock-solid opposition without any trollers or one-man shows. You’ll need to give your best, communicate with your team and work together for each and every single win. Good luck!

Ranking up in CS:GO requires wins. Yep, wins, wins and nothing but wins. The more consecutive wins you have, the more likely you are to rank up. Lose a match, and you’ll be right back at square one, annihilating your previous win.

At the moment, there are four different groups of ranks in CS:GO, namely: Silver, Gold Nova, Master Guardian, and Elite.

Nothing has changed as far as the number of CS:GO ranks is concerned. The game still features 18 different ranks across four groups.

The topmost spectrum of CS:GO players – the best 1% – possess ‘The Global Elite’ rank. It is the highest rank in CS:GO.

At the casual level, CS:GO ranks are as important as you make them be. With the number of smurfs currently playing in lower ranks, it’s difficult to argue that CS:GO ranks still represent one’s skill.

Through our in-depth guides and reviews, we are focused on providing the best insights into esports betting.